“Taimatsu (torch) festival” is dedicated to the shrine of the shrine which is the guardian shrine of Asama hot spring.

Misa-jinja Shrine has arranged Okumiya (Akimiya) in the Misayama mountain range several kilometers away, Palace of Asama at Shima Onsen (Shunsui) and two palaces, and the same building name as Suwa Taisha as the Shinto shrine It was revered as a god of hunting and farming, festivating the three gods of Yasaka swordfish (Yasaka Tortoise), Masoshi Miyoshi (Misono no Mikoto).

In order to protect residents’ lifestyle and fertility, the God who has been sent down from the Okugi branch to the temple of the Asama between the end of every year is sent to the fire of the torch dedicated by the villager at the end of the autumn take-in, I will return to Oku company in the mountains again.

About 50 torches to be dedicated. It is a bundle of “Mugimigi”, some of which are three meters in length and some larger than two meters in diameter. In the spa town where the eaves were set up, a few young people walked round the flaming torch, he was surrounded by flames and smoke, and a magnificent drum was ringing, the excitement of Asama hot spring in the hot spring reached the climax welcome. The last thing to celebrate the festival by losing it is a brave one suitable for the name of the fire festival.

Participating guests can jump in, so please do not hesitate to contact us.
(Asama Hot Spring Tourist Association: 0263-46-1800)

The torch starts from point A on the right map (hot water in the harbor) and slowly walks around the spa town of Asama. There is also a torch which climbs directly from C to E on the way. Finally, at the Emperor’s shrine at H, he threw a torch with fire and throw it into dedication. 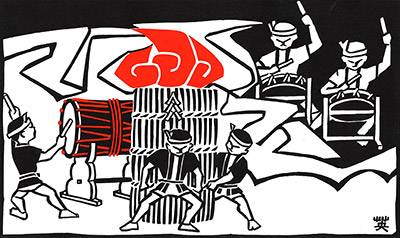